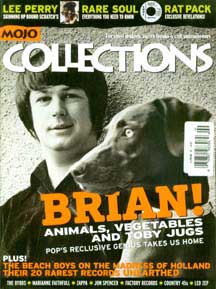 "Brian was determined to make a record that would blow everybody's mind, including the Beatles."~David Leaf, from the Brian Wilson press kit.
"I think the Beatles will get into this, I think they'll pick up on it."~Brian Wilson 1966(LLVS,pg.168.)

"Now, for the first time, we possess the means of providing the enlightenment to any prepared volunteer."
~Timothy Leary, The Psychedelic Experience, (pg.31.)
"People who experimented with psychedelics---no matter who they were---were viewed as 'enlightened people,'
and Brian sought out the enlightened people."~Van Dyke Parks

"He'd never take it again, he says, because that would be pointless, wouldn't it? And the people who take it all the time, acid heads, he can't go along with. Like all those people---Timothy Leary and all---they talk a lot, but they don't really create, you know?"~Brian Wilson paraphrased by Tom Nolan, (LLVS,pg.168.)